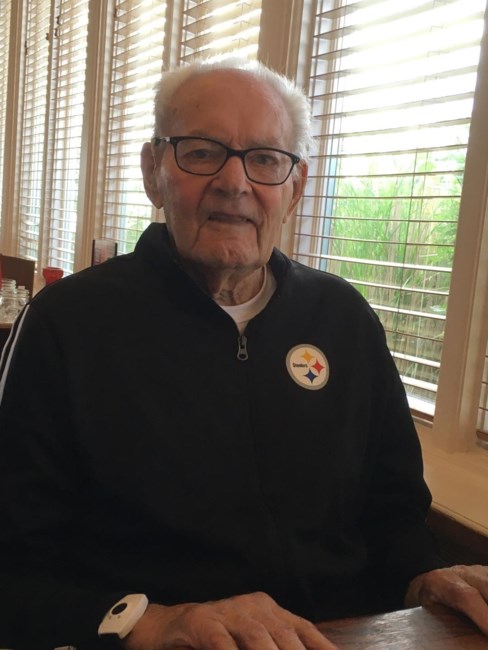 OBITUARY FOR GEORGE LYMAN DONGES 1/27/1925 – 4/20/2022 George Lyman Donges, age 97, formerly of Canton, Ohio, died peacefully at Tapestry Senior Living, on April 20, 2022, with his family at his bedside. George was the beloved husband of Patty (McLaughlin) Donges, loving father of Diane Downer (Margaret Andrecovich), Joanne Burger (Timothy), and Robert Donges (Becky Rowlands), proud grandfather of Jason Downer (Lisa Locke), Dane Downer (Kristina Janssens), Brian Burger (Michele Auldridge), Kristin Scaglione (Michael), Emily Wise (Billy), Adriane Donges (Kyle Johnson), Jeremiah Donges (Marissa Beltran), and adoring great grandfather to 13 great-grandchildren. He is also survived by a host of cherished nieces, nephews, cousins, and friends. George graduated from Timken Vocational High School in Canton, OH and attended Butler University in Indianapolis, IN. George proudly served in the US Navy Air Corp as an aviator radioman/tail gunner during World War II in the Pacific from 1943-1945 for which he received numerous medals of honor. George worked for Keebler Company for over 30 years as a sales manager. As a result, his grandchildren will always remember him as “Cookie Grandpa.” George was an avid sports fan, keen card player, sharp dresser, and connoisseur of deserts. He will be fondly remembered for his warmth, confidence, humor, and distinct laugh which allowed him to effortlessly connect with anyone, anywhere. Those wishing to honor George may donate in his name to Honor Flight Pittsburgh. A Celebration of Life will be held at a later date. Memories may be shared at www.cremationofpennsylvania.com
See more See Less

In Memory Of GEORGE DONGES