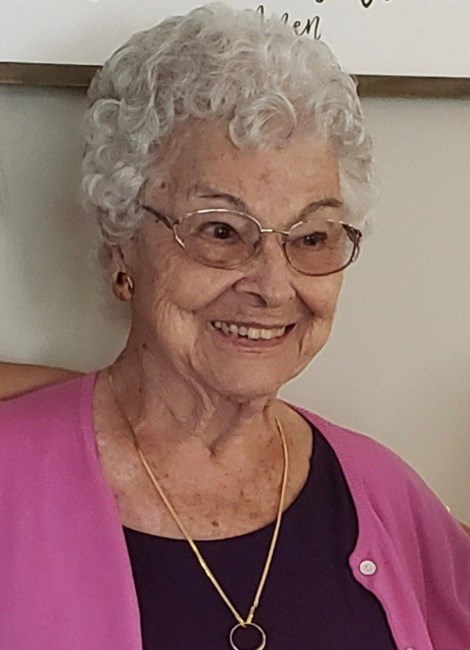 ~ Evelyn R. Ulery, age 91, of Shiremanstown, Pennsylvania was greeted by heavenly angels on November 20, 2022, after bravely battling cancer. In her passing, she was reunited with her loving parents Mr. and Mrs. Charles Ross of Hollidaysburg, her seven siblings, and her husband of 70 years Reynor L. “Chib” Ulery. Evelyn and Chib were high school sweethearts at Hollidaysburg High School, where she graduated at age 17. After graduation she began employment at Bell Telephone Company and later The BonTon. The two were wed in the United Methodist Church in Hollidaysburg on October 27, 1950. The thing she loved the most in life was family and created a beautiful legacy with Reynor. Together, they had three children whom she is survived by Elizabeth Kotsch (Gary) of West Chester; Susan Kostelac (Rick Peters) of Mechanicsburg; and David Ulery (Julie) of Tooele, Utah. In addition to mother, she was affectionately given the title of “Nan” by eight grandchildren and 11 great grandchildren. Nan spent countless hours attending sporting events and extracurricular activities supporting her loved ones. She became Trinity High School’s “Number 1 Sports Fan” watching her grandchildren play numerous sports and later supporting them as coaches. She took great pride in being involved with her family and cherished dedicating decades to them. In doing so, Nan became a “Nan” to fellow teammates and spectators alike. All were welcome at Nan’s house, always greeted with a warm smile, opened arms, and a plate of cheese and crackers. During basketball season she could be found on the front row of the bleachers at half court, offering her assistance to any referees she felt could use a helping hand. Nan’s expertise will undoubtedly be missed by many, and the stands will be quieter for seasons to come. Evelyn was an active member of Wesley United Methodist Church of Mechanicsburg where she sang in the church choir and served on numerous committees. She loved working in her yard and gardening with her grandchildren, teaching them the proper way to plant and nurture seeds to fruition. She will be remembered for her quick wit, loving heart, and kind soul to all who knew her - especially by those lucky enough to have called her Nan. The family asks that memorial contributions in Evelyn’s honor be made to Wesley United Methodist Church at 203 S. Filbert St, Mechanicsburg, PA 17055, or Homeland Hospice, Attn: Myra Badorf, Asst. Director of Development, 2300 Vartan Way, Suite 270, Harrisburg, PA 17110. Services in honor of Evelyn’s life are being finalized and will be announced at a later date.
See more See Less